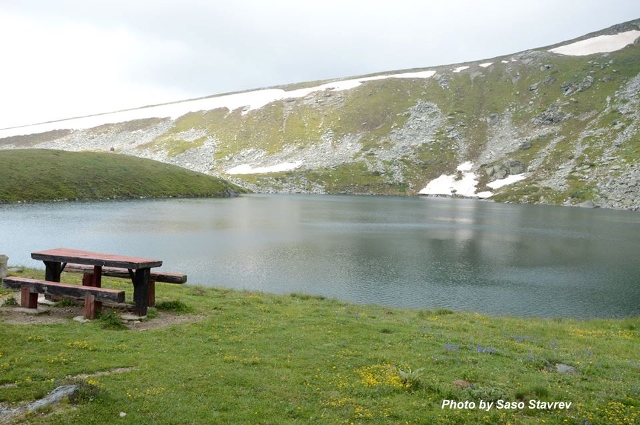 The trail starts at Nizhopole Village, follows the locality of Debel Rid, and leads directly to Big Lake (Golemo Ezero).

The purpose of the trail is mountaineering, recreational and visually attractive. It passes opposite of Red Rocks (Crveni Steni) and has a beautiful view of that side of the rocky slopes of Pelister, then a view to the Peak Pelister, to Bitola and the Pelagonia Lowland.

The trail is of considerable tourist interest to visitors interested in semi-mountaineering and fast climbing to the Big Lake and is attractive to landscape lovers. From this trail you have a nice view to Red Rocks, place of historical significance, because in the WWI the biggest battle on Pelister took place at this location, where the Bulgarian and French units clashed, and the French troops suffered many casualties: about 6,000 soldiers died at this place, in a day.

Description of the trail: The trail is 9 km long and lasts 4 hours.

The trail starts from the village of Nizhepole, goes along the Ski Center and through Orlovi Bari leads to Big Lake (Golemo Ezero).

The purpose of the trail is mountaineering, recreational and visually attractiveness, it passes opposite of Red Rocks (Crveni Steni) and has a beautiful view of that side of the rocky slopes  on right side, and several peaks of Baba Planina (Skrkovo, Muza, Griva) on the left side. Passes by so-called Durmish Tap (Durmish Cesma), and has a beautiful view of Bitola and the Pelagonia Lowland. Its passes by the locality Orlovi Bari, and by the so-called. “French Road” reaches Lake Big.

The predominant woody species along the trail is beech, spruce, low-stemmed molika pine, birch and rarely fir, blueberry, raspberry, blackberry, strawberry and various types of mountain ornamental flowers, as well as lynx and other medicinal plants. From the animal species you can find wild goat, wild boar, bear, wolf, fox, rabbit, fig, eagle, partridge, and in the river Sapuncica – the Pelagonija trout and several species of butterflies and insects.

The trail is attractive for landscape lovers. There is a beautiful view of Crveni Steni, a rocky area of ​​historical significance, because in the First World War, the biggest battle of Pelister took place at that very location. The trail has a beautiful view of Bitola and Pelagonija, and especially the valley of the river Sapuncica.