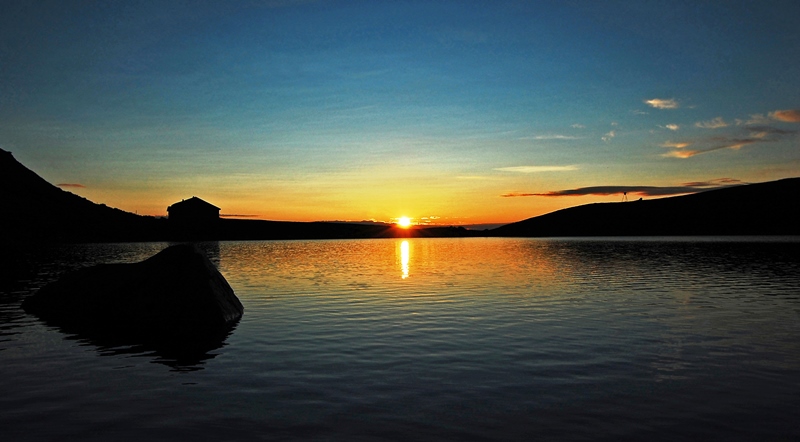 The trail starts from the Information Center – Pelister, locality “7 Kladenci”, known as the location: “Villa of Lazo”. The trail passes through the locality Caparska Preseka, besides the so-called Hunting House, exits at the location – Shiroka, and in the business of the place where you have to turn left towards Antenna and the Pelister Peak, you descend to the Small Lake.

The purpose of the trail is hiking and recreational, is visually very attractive, with view on Peak Kozji Kamen  and the valley of the Caparska River and Pelagonia Lowland. From the turning point towards the Antenna and the Peak Pelister, a view and visibility towards the Prespa Lake opens. When you climb to the Peak Pelister, you have a view on the Prespa Lake and Lowland, the Pelagonia Lowland, the many peaks of Baba Mountain and the city of Bitola.

Flora and fauna: The predominant woody species along the path is the moth or the Macedonian pine, (Pinus peuce Grisebah), and the fir (Abies alba), the fern, the yellow primrose,  the carnation, the geranium, the blueberry, etc. Animal species can be found, roe deer, bear, wolf, fox, rabbit, squirrel, mole, some birdsspecies, many butterflies species, insects, etc.

The trail is of considerable tourist interest for visitors interested in climbing or reaching highest peak on Mountain, Peak Pelister. The trail is known as the Trail to Antenna, as most of trail passes and coincides with the only forest road leading to Antenna (Pelister Peak), after turning left from the main forest road, that continues to Big Lake.

The trail is fully marked by mountaineering standards. Along the trail (road) before reaching Shiroka, there is a mountaineering house – named  “Shiroka Mountain Hut”, used and maintained by the Mountaineering Club “Dimitar Ilievski Murato” from Bitola.

This variant is identical to the First variant, up to location where the path (mountain road) divides towards the Pelister Peak. The second variant continues from there, to the Big Lake which is long about 10 km.

The total length of the track Infocenter – Big Lake is 22 km.

Flora and fauna: The predominant woody species along the trail at lover part is the Macedonian pine Molika (Pinus peuce Grisebah), and fir (Abies alba). In the area above the Molika forest, the high mountain pastures of Pelister are spread. In the lower parts, pastures are mixed with blueberry and spruce, but in the higher parts, dominated blueberry and types of grass communities of special floristic importance.

The trail is of great tourist interest for those who want to climb to the Peak Pelister, to visit and see the Small Lake, but above all, to visit the Great Lake.  These two lakes are named “Pelister Eyes”.

From the ascent to the site Shiroka and the place called Semafori, a view and visibility opens to Lake Prespa and Prespa Lowland, also to the peaks of Baba Planina, that gravitate to the Presa Lake side: Dva Groba, Golema Chuka, Mala Chuka, and a part of the Valley of Malovishka Reka. Then a view opens to the villages of Krani and Arvati, and to the left, towards the Peak Marushica.

When you continue along the trail (mountain road) from the left side you can see Debel Rid, and the peaks: Skrkovo, Muza and Griva, and in the valley below the Pelister Peak you will see a view of Crveni Steni (Red Rocks) – the rocky slopes of the mountain, which descend to the Nizhopole Village.

The trail is fully marked by mountaineering standards. After crossing the small plateau, the road leads to the Great Lake, which is located under the Peak Veterniva, and next to the lake is the Mountaineering Hut, known as the Great Lake Hut, that has the name of alpinist Dimitar Ilievski – Murato, the first Macedonian who climbed Mount Everest.