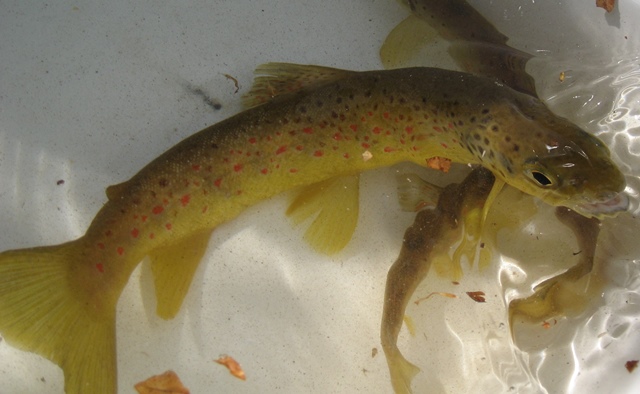 Science has knowledge of the presence of two species of trout, but not of their complete distribution in the waters of the NP Pelister area. It is about Salmo peristericus Karaman, 1938 and Salmo pelagonicus Karaman, 1938.

The Pelister trout was first described by Karaman (1938) as a subspecies Lalmo trutta peristericus, characteristic of Lake Prespa and the Brajchinska River. Pelister trout with higher density is represented in the waters of the river Germanos, on the Greek side, while with lower density is represented in the waters on the Macedonian side – Brajchinska River and its tributaries, as well as Kranska Reka and Leva Reka (tributary of Golema Reka). In 2010, the presence of a stable population of the Brajchinska trout on Rzhanska Reka was established, a tributary of the Brajchinska Reka, which is part of the Pelister National Park.

Within the National Park “Pelister”also flow the waters that gravitate towards the Black River, as part of the Vardar catchment area. the taxonomic status of the Pelagonian trout (Salmо pelagonicus Karaman, 1938).

Unfortunately, do not exist contemporary data on the distribution and condition of the populations of Pelagonian trout in the waters of Pelister, which gravitate towards the Black River, especially for River Shemnica.

In order to monitor the distribution of Pelagonian trout in 2019, an electric vibration was performed on rivers: Magarevska, Rotinska, Caparska, Sapundzica and Crvena. At all of the this rivers have been built water intake for water supply.  This is perhaps, one of the reasons for the absence of trout in Magarevska and Rotinska River.

No trout was registered on the Caparska River. According to locals, trout are often detected, but only in the upper reaches of the river (above the drinking water intake), and in much smaller numbers than in the past.

The possibility of the presence of Pelagonia trout in Ezerska River is not excluded. Ichthyological research is needed to determine whether trout inhabit the waters of Zli Dol, Manastirska River, Mala Koria and Ezerska River.

Within the Pelister National Park there are the two glacial lakes Golemo Ezero and Malo Ezero, for which there are no specific literary data on ichthyofauna. In several occasions the Golemo Ezero has been stocked with trout, but what kind of trout is in question is a speculation.