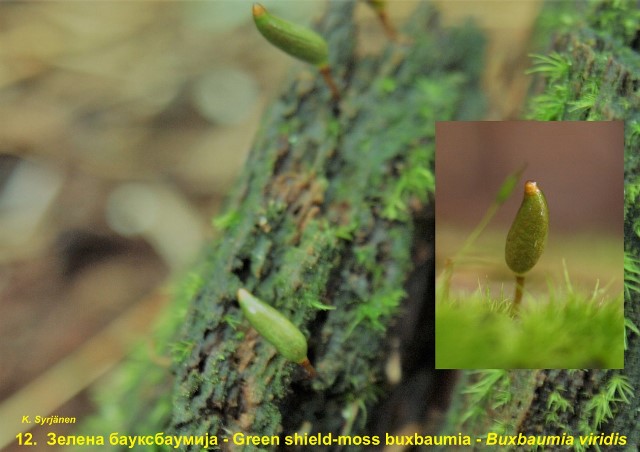 The Pelister Management Plan 2006-2015 Amendment included 1,034 plants taxon. Of these, 21 were mosses (Bryophyta and Marchantiophyta). Additional research in 2019 added as many as 273 new species of mosses, mainly by the research team from Finland, and above all, from Kimmo Syrjanen. Thus, the flora of NP “Pelister” is now represented by at least 1307 taxa.

In the habitat 3260 Water flows in the plains to the mountain level, at most streams and rivers on Pelister, meets the Willow Moss (Fontinalis antipiretica). It grows on rocks in rivers and streams, which are mainly characterized by clear oligotrophic waters.

In the type of habitat 7140 – near the Big Lake and Small Lake can be find Sphagnum spp moss.

The species  Andreaea rupestris moss, which is a nationally protected species, is found in the Habitat 8150, as it is a rare plant in the flora of RN Macedonia.

The flood springs are rich in mosses, with a high prevalence of moss Cratoneuron commutatum or known also under names Palustriella commutata or Cratoneuron falcatum. Habitat 7220 * Petrification sources with cratoneuron formation are rare in Pelister National Park (Sapundzica, Gjavato). There are sites characterized by the presence of Cratoneuron filicinum / Palustriella spp.

Habitat 7230 Alkaline swamps are rare and small habitats on Pelister. It is characterized by marsh mosses such as Campylium stellatum, Bryum pseudotriquetrum and Sphagnum contortum.

Mannia triandra is a type of moss that is on the Annex II Habitat Directive (Sokod 1379). This plant is found on Pelister, near the shore of lake Golemo Ezero, 2200 m., on the wet rocks.

Moss with a green protective capsule (Buxbaumia viridis) belongs to the Annex II Habitat Directive (Code 1386). In NP “Pelister” there is a large sustainable population in the Mediterranean silver fir near Palisnopje. The capsules begin to grow in the fall in humid conditions and they grow and mature during the winter and spring. Buxbaumia viridis is a typical species for old-growth forests with many decaying trees and a humid micro climate. The base of Buxbaumia viridis is usually decayed coniferous tree in the late decaying stages (Abies alba, PIcea abies), less commonly found on deciduous trees (Populus tremula, Fagus sylvatica). However, it sometimes grows on humus or peat soil. Buxbaumia viridis was found at three sites in NP Pelister in 2018.