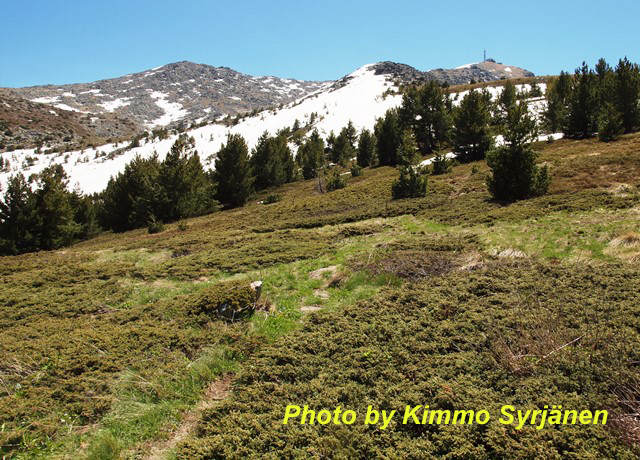 Ecosystems and habitats on Pelister

Totally 22 habitat type, listed in the Annex I of the EU Habitats Directive are found in the Pelister area:

3130 Oligotrophic to mesotrophic standing waters with vegetation of the Littorelletea uniflorae and/or Isoeto-Nanojuncetea. Two water bodies: glacial lakes Golemo Ezero (3,7 ha) and Malo Ezero (0,66 ha) belongs to this habitat type, although they lack submerged vascular vegetation. These lakes are lacking all larger plants at water body and production of lake ecosystem is based on algae. Habitats Directive and other important species, except endemic amphipode species (Niphargus pancici subsp. pancici in Golemo Ezero), are not recorded from this habitat type in Pelister NP. In addition to Niphargus another local endemic species is met: the flatworm Rhynchelmis komareki subsp. komareki, and additionally other rare invertebrate species like Chirocephalus diaphanus, Arctodiaptomus neithammeri and Artcodiaptomus osmanus have been found at this habitat type at Pelister NP (Avramoski 2006a).

4060 Alpine and Boreal heats. The habitat type 4060 is present at Pelister NP. It is fairly common and abundant at subalpine and alpine areas of the National Park at altitudes 1600 – 2300 m a. s. l. Most of occurrences are located to alpine areas above natural upper forest boundary. At lower parts of alpine zone there are low-growing Juniperus communis heaths (Juniperus nana / sibirica) those change to Vaccinium myrtillus and Bruckenthalia spiculifolia dominated heaths upwards. Different subtypes of alpine and boreal heaths form often mosaics with each other and with alpine grasslands. Habitat Directive Annex V vascular plant species Gentiana lutea is often met in this habitat.

5130 Juniperus communis formations on heaths or calcareous grasslands. The habitat type 5130 is common in Pelister NP. Juniperus communis is typical component of several habitat types of (dry) grasslands and rocky habitats. Description of this type is mainly based on the abundance of juniper. Juniperus communis formations with long continuity are often characterized by grazing sensitive herbs and ferns as well as pleucarpic mosses in undergrowth. Most sites of this habitat type are of rather recent origin. Cessation of traditional use (usually grazing and management of pastures by burning or removing junipers) has lead on formation and overgrowth of these habitats by dense juniper stands.

6210 Semi-natural dry grasslands and scrubland facies on calcareous substrates (Festuco-Brometalia) (* important orchid sites). Grasslands of this type are present in subalpine and lower parts of Pelister NP. Most sites are mainly small in area and they are growing over by junipers, bracken, tall herbs and grasses as well as trees and shrubs. This type is more representative on calcareous soils, but there are some species-rich sunny grassland slopes with Mesobromion species composition at Pelister NP. Further abandonment results in thermophile scrub with an intermediate stage of thermophile fringe vegetation (Trifolio-Geranietea).

6220 * Pseudo-steppe with grasses and annuals of the Thero-Brachypodietea. This type is met at lower parts of Pelister NP e. g. above Dihovo – Nize Pole and northeast of Golemo Livida. There are large and representative pseudo-steppes at western slopes of Pelister NP between park and Prespa Lake, mainly outside of the National Park.

62D0 Oro-Moesian acidophilous grasslands are common and prevailing at alpine and subalpine part of the Pelister NP. These alpine grasslands form mosaics of different grassland vegetation communities and with subalpine heaths. This habitat type is typical for central Balkan mountain and contains many species with high conservation value. There are local endemic species of vascular plants in this habitat type including Crocus pelistericus, Dianthus myrtinervius and Sempervivum octopodes. Habitat Directive Annex V vascular plant species Gentiana lutea is often met in lower parts of this habitat.

6430 Hydrophilous tall herb fringe communities of plains and of the mountain to alpine levels are typical along brooks and streams of Pelister NP. In montane and alpine areas there are species rich habitats of this type is high represented. At lowland fringes has often changed due to human activities. In vascular plants there are several Balkan endemics in this habitat type and Alchemilla peristerica is a local endemic.

6510 Lowland hay meadows (Alopecurus pratensis, Sanguisorba officinalis). This type of vegetation is met at lower parts of Pelister NP. There are mowed meadows close to Maloviste village those belong either into this type or to 6520 Mountain hay meadows. In Gjavato pass there is a grassland area inside Pelister NP with long overgrowth history but it may originally belong into this type 6510. Also, several small overgrown grasslands with dominating stands of Asphodelus albus and Pteridium aquilinum are originally meadows and may represent degraded hay meadows or type 6210.

7140 Transition mires and quaking bogs habitat type has high conservation value in the Republic of North Macedonia, because this type of habitat consists mainly of EUNIS habitat type “Pelagonide Macedonian sedge fens” which is endemic for Balkan. In the study area this type is rare and local with few occurrences close to Golemo and Malo Ezero lakes. Habitat directive Annex V Sphagnum spp. mosses are often dominant species in this habitat type. In addition there are Balkan endemic species of vascular plants.

7160 Mineral-rich springs and spring fens are rather common especially at alpine zone of Pelister NP at outflow sites where mountain brooks and rivers start to run. There are also springs and spring brooks of this habitat type along slopes of Mt. Pelister and other peaks of Baba mountains inside forest zone. These habitats have specific flora with both boreal and alpine species and several Balkan endemics like Dactylorhiza cordigera, Carex macedonica and Silene asterias. Also water invertebrates with high conservation value are present in this habitat type.

7220* Petrifying springs with tufa formation (Cratoneurion) are present with small and rather non-representative occurrences in seepage slope of Sapundiza (above Nize Pole) and at springy Alnus glutinosa wood close to Gjavato pass in Pelister NP.

7230 Alkaline fens is a small and rare habitat type at Pelister NP. It is present inside forest zone, usually at mineral rich places with some trickling groundwater. In species composition there are typical fen species of vascular plants including Eriophorum latifolium, Blysmus compressus, Listera ovata and fen mosses like Campylium stellatum, Bryum psedotriquetrum and Sphagnum contortum. Also Balkan endemic vascular plants typical for habitat 7160 are often present in this habitat type.

8150 Medio-European upland siliceous scree. The habitat type 8150 is common and characteristic for Pelister NP. Into this type are included here all boulder scree habitats at the slopes and summit area of Baba Mountain. Famous “stone rivers” of Pelister NP belong to this habitat type.

9180 * Tilio-Acerion forests of slopes, screes and ravines is a rare habitat type in Pelister NP. It is met along slope of river Semnica between Kazan and Maloviste. Part of the habitat is destroyed recently at construction of hydropower plant road. It is also present along river Brajcino, but presence inside the National Park need to be confirmed. This type can be met at sides of river ravines in lower part of Pelister NP and should be looked after.

91E0* Alluvial forests with Alnus glutinosa and Fraxinus excelsior (Alno-Padion, Alnion incanae, Salicion albae). This priority habitat type is present here and there at slopes and lower part of Pelister NP. At slopes it usually forms corridors and stripes along spring brooks and streams. In some springy sites it forms small woods. This habitat type is important for amphibians, including Rana dalmatina and R. graeca.

91W0 Moesian beech forests are probably the most common type of forests in Pelister NP. There are some scattered and fragmented stands with old trees and large decaying logs with characters of pristine forests. These stands have very high conservation value.

95A0 High oro-Mediterranean pine forests are typical for Pelister NP. Conservation value of this habitat type with the Macedonian Pine Pinus peuce forests is very high. Strict conservation of all natural stands and stands with characteristics of old growth forests of 95A0 at Pelister NP is globally important. Many stands have long forestry history and several stands are regenerated at Yugoslavian time and managed afterward. Habitat Directive Annex V vascular plant species Gentiana lutea is often met in subalpine part of this habitat.