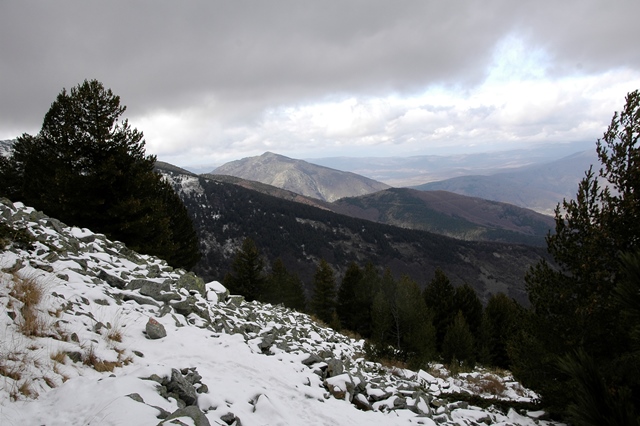 The influence of the continental and mountainous climate is felt on Mount Baba, where the Pelister National Park is located. The impact of the mountain climate is increased because it is a high mountain above 2000 m. Climate conditions on Mount Baba are influenced by several factors, such as latitude, altitude, direction of mountain ridges, vegetation, etc. The western parts of the mountain, especially those at lower altitudes, are strongly influenced by the water basins of Lake Ohrid and Lake Prespa.

Soil-climate-vegetation zones Pelister National Park stretches at an altitude of 880 – 2601 m. According to the methodology of Filipovski, Rizovski and Risteski (1996), several soil-climatic-vegetation areas appear in the Park:

In the subalpine area, the average negative temperature occurs in March, and in the alpine area, in March and November.

During the analysis of precipitation in a longer period, data from several stations were taken. Based on the data from Table 12, a mathematical relationship between precipitation and altitude was made. Table 12. Average rainfall at some rain gauges by months When approximating the precipitation for different zones on Baba Mountain, the values ​​obtained mathematically can be taken as a correlation with the altitude. Thus, for the subalpine and alpine areas, the precipitation is determined on the basis of analogy with rainfall stations in similar areas in the country (Table 13).

Although there are no measurement data, the maximum expected average annual rainfall in this area should not exceed 1200 tt, at an altitude of about 1650 m. altitude.

A logarithmic dependence between elevation and precipitation with a determination coefficient of P2 = 0.996 has been determined, which means that the relationship is almost functional. Appropriate data from the stations Bitola and Kazani were used to determine the precipitation in NP Pelister for the period 1991 – 2000.

Others are close to average values.